Home now, this morning I stare out at the still snowy woods beyond my window and try to recall the warmth of sunshine as I’ve recently escaped this wild and most precipitatious winter for a few days on another Floridian adventure. Sitting at my kitchen table with a steaming cup of green tea, a Swiss chard avocado and Siracha breakfast burrito and my cat sitting beside me I encourage the words to communicate my latest travels.

Conscientious to avoid spring break travel rates I was flexible in scheduling the dates of flights and thankfully, it worked out that I could still be elsewhere to celebrate my 26th birthday; in essence, my only wish. It’s not only due to my impatience of flying that I avoid layovers, but also due to the huge pain in the ass of travelling by plane in a wheelchair. If you only knew, the sometimes half an hour to an hour that it takes for private security screenings… I could scream! And I always marvel at the tiny size of the isle chair in which helps me to my seat on the plane and the inconveniences this must impose on anyone less able or the least bit larger in size. Okay, I apologize and am through with this rant.
I’m also glad that we opted out of flying directly into the Keys, it was much less expensive and rental cars can be found in Miami for as inexpensive as $30 a day. Although I didn’t personally drive here and have yet to take the risk in renting a vehicle adapted with hand controls, I appreciated my mother driving immensely and trust me, the transition and drive into the Keys is worthy of the trek. Arriving in Miami with a mere afternoon to spend, with little desire to even people watch in South Beach, we’d barely orient ourselves in this big colorful city and settle for a peek at Peacock Park and lunch in the nearby Cocoa Walk at the Green Street Café. Seated on cool red velvet sofas we’d enjoy a club soda with lime, a blackened dolphin wrap and this delicious tuna on a bed of greens with refreshing mandarin orange vinaigrette and observe all the tan stylish passer-by and their dogs. Interestingly, I’d later learn in conversation that pit bulls are not even allowed in the city of Miami and in briefly researching the proliferation of dog fighting in the city and learning of “trunking,” I am sadly appalled. I’ve recently met some of the sweetest pitt bulls and wish I could travel with my dog, my St. Bernard, but now that I think of it… Haha. Yea Right! For any of you that know Opie. So the sights of this city were fleeting and we set off to explore.

In travelling, I aim to balance experiences in culture and nature and my birthday beautifully embodied this contrast. I’d begin the day by venturing into the Everglades National Park and enjoy the night in Key West.

Upon proceeding through the park, the sun streaming all around us, my expectations of the landscape were deceived. I was not surrounded by water, but a low flat river of tall grasses rustling in the breeze with occasional stands of dwarf cypress trees and hardwood hammocks. I was surprised, but the expansive wetlands that I perceived are seasonal and in the wintertime the parks expanse is primarily coastal prairie. 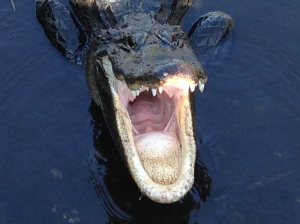 Disappointingly, what we did not see at Paurotis pond was Roseate Spoonbills, which I admiringly anticipated seeing and we’d chuckle at the tarps supplied to protect your car against the attack of vultures. 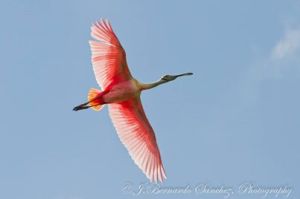 In describing the general landscape of the park earlier, it’s not to say that water is entirely absent; slow flowing and small winding waterways are pervasive and then there is the canal which we’d kayak that afternoon. While renting our kayaks I’d discern the shrill chirp of an osprey and turn around to notice a nest with a mother and two chicks peeking out. The Ranger staff was incredibly helpful in getting my kayak into the water from the dock. From there we’d paddle and saunter down the canal; its water sparkling in the sun. Its embankments were shrouded by mangroves, root systems exposed, in which we’d tuck our kayaks into seeking shade and get caught in spider’s webs. 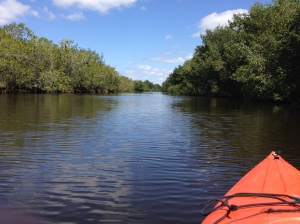 We’d encounter no manatees, one adorable baby crocodile and many alligators basking in the sun at every little beach. So still, the alligators seemed almost unresponsive except when you’d come too close and they’d dart into the brackish water, terrifying when you couldn’t see their whereabouts beneath you. Or you might see their driftwood looking heads just above the water and very aware of your passing, following you with their black beady eyes.

Despite being munched on by mosquitoes, it’d be pleasant to eventually find a rhythm within my balance and paddling and push ourselves on the return against the resistance of the wind.

There’s something extremely liberating to meander through land and water, where once only the Seminole and alligators and crocodile akin to dinosaurs evasively existed; a landscape so presumably impenetrable.