I was not expecting to be so taken and to have such a joyous time while passing through South Dakota, but it didn’t initially begin that way. I was disappointed as I missed visiting a friend’s ranch in Montana. Trust and believe the potential opportunity to be thrown up on a horse again was enticing, but it was too far out of the way. Memory was sparked while driving through the tiny town of Sundance, WY as that was a name of the stocky chestnut coated horse I used to ride. This memory was the catalyst for calling my father; a phone call in which I became overcome with emotion, even to the point of crying. Eyes welled up was no excuse, but I somehow overlooked the yellow light alerting me that I was out of gas. Sitting on the side of I-90 with my windows down and flies in my car I was thankful at the slightest breeze and gusts of air from passing trucks that helped to dry my tears. In traveling I’ve thrown my love to the wind and the world and find consolation of this feeling free. Momentary sadness might be a relevant feeling during an experience; however, it is crucial that it’s fleeting. AAA helped to overcome this emotional mishap and I was back on the road before you knew it.

I can’t express my appreciation as I’ve experienced the change in the American landscape on this grand adventure. I am witness to the simultaneous affects of both humans and nature on this amazing continent. Something I always admire are both the regional differences and cultural influences of the American Main St. Where time has added more layers to towns of the East coast, in the West, the stories of places are more easily discerned and seem more apparent. Put simply, towns appeared where the train came through, some flourished and despite the large false store-fronts, some were lost and forgotten.

I’d soon say goodbye to the Rocky Mountains, but just before doing so, I was brought through the Black Hills and into the town of Deadwood. It effectively captured the energy of an Old West town, although almost tipped the tourist scale. The theater, the gambling, the saloons and the inns have stayed, but just shifted to their contemporary identities while clinging to the character of their past. While glad that I stopped, I continued on to the next town, hilariously, of Sturgis. Sturgis was a ghost town in the sense that the thunder and flood of motorcycles during the notorious bike week was not yet present. I was determined to experience the culture and happened upon the obvious biker bar of Knuckles. Here I was driven into hysterics by the bikers that I tossed bean bags with. It was an example of finding kindness in the most unforeseen spot. They kindly expressed pride in that I would take such an adventure of such magnitude and this made me smile.

The next day venturing into the Badlands continued to blow my mind. “The prairie is not forgiving. Anything that is shallow- the easy optimism of the homesteader… The trees whose roots don’t reach ground water- will dry up and blow away.” -Kathleen Norris, Dakota. The powder blue sky was filled with light and cotton clouds. It’s always strange to me when the ghostly moon is also up so early in the evening, before the sun has set. The prairie wind blows, rippling the grassy plains. The golden grass rustled as I brushed my hand by it. It is an expanse in which only the Cottonwoods grow with their ability to seek out water in such arid land. There were some bison in the distance and I spotted families of bighorn sheep traversing steep hills and one loner off lying amongst the sunflowers. Adorable prairie dogs reminded me of that carnival game where you whack the mole. Within the stone spires and mounds is a register of ancient life with many fossils. The spirit of this place is unmistakable. 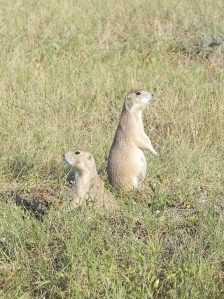 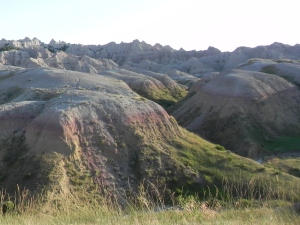 I should have been content to sleep under the stars in one of the little coverings at the campground, but the inertia of my travels insisted and carried me on. I passed through Okaton, a ghost town, which was actually very scary in the dark where shadows played upon my tired mind. My whole time crossing South Dakota I’d watch storms sweep the plains and wild lightening strike in the distance. At one point I was unable to run from the dark skies and was caught in a volatile thunderstorm with hail. On this night, I slept in my car; fell asleep to the sounds of the highway and was awoken by the crack of lightening several times.

While driving through the Crow Creek Sioux reservation an uncertain feeling arose that I’ve never ever felt before. I still struggle finding words to rightfully express it, but it was something of an empathetic response. There was unease similar to Vegas as the casino parking lot was the only one with many cars and I saw mothers walking home with armfuls of groceries and children trailing behind. I met a Blackfoot man in Deadwood who remarked that prejudice was alive ‘cause Custer died and I sensed resistance in his blood. I was bitter at the nearby town name of Reliance. It might seem insignificant, but the smile exchanged with the woman in the blue pickup at a stop light was special.

From here on out, the somewhat unexciting Midwestern terrain that I’d been warned about began; although I wouldn’t call it boredom. I thought a lot about Homesteads and how to incorporate it more into my lifestyle. I wondered at the story behind some of the houses left to prairie wild. One in particular was an empty small burgundy colored house with tattered shutters sitting in the high grass. Broken windows and open doors allowed me to see right through the structure and into its unknown past. Beyond that, it was a patchwork of prairie, oil rigs, farms, hay fields, corn, soy and live stock until from the grassy rolling hills, the Twin Cities arose. 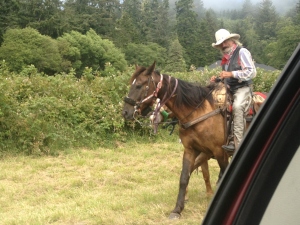 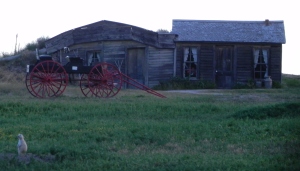