The Siren City of New Orleans

“New Orleans is a siren of a city. A place of fables and illusion.” I knew that I’d heard something that captured the essence of New Orleans somewhere and have managed to remember it, remarkably. It is extremely alluring in that most are inextricably drawn to the place while at the same time trying to escape. Wandering the lively streets, myriads of catalysts are awaiting to be experienced by individuals. They may be as small and simple as the smile of a passing stranger or grand in the transcendental event of encountering a stellar street performer.  She called herself a living statue and she was not a she at all, but gender was irrelevant to her beauty. Staring into this person’s eyes caused an incendiary spark within myself; a sort of epiphany, as she was such an extraordinary embodiment of New Orleans and the mystery within this place. I wonder at the conviction of this character: the floral print of her kimono, the black tulle, the torn fishnet stockings on her arms, the skull bracelet, the cool hued dreads, the contrasting pink geisha painted eyes and most interesting of all the gold frame she unrelentingly chose to hold up to herself for hours at a time. That artistic choice to frame herself and encapsulate her beauty fascinated me. I’m still focused on her, on New Orleans; it was a very hard place to leave.

“I, like God, don’t play with dice and do not believe in coincidences,” is something I’ve weighed, pondered and carried around with me.  I’ve made up my mind, on this journey and in life in general, experiences are rarely coincidence, but instead meaningful happenings gravitated by synchronicity. That things are propelled by a certain level of chance, attracted to our energy and not that everything happens for an external reason, but that we rather instill such experiences with meaning. Just in the short course of this trip already, I’ve experienced countless such encounters. These catalysts, that I’m compelled to capture and dissect like insects, are not necessarily meant to be understood, but rather, be woken for, chased through sunlit fields and dark and sparkling dreams.

Hmm… I’ve begun on such a tangent and have shared very little about New Orleans. While traveling so rapidly on a plane, upon arriving you must allow time for your soul to catch up, driving in a car you see the transformation of the land before your very eyes. Although Amanda and I rushed from Atlanta and traveled straight through the night, we decided to sleep at a truck stop and then begin the next day gradually acclimating ourselves in driving along the Gulf Coast, such an interesting landscape. In seeing a little tug boat misplaced on the side of the road you realize what a tumultuous lifestyle living here at times must be.

Eventually arriving in New Orleans we thrust ourselves right into the shocking culture of Bourbon St. I’d been here once before and surprisingly soon after my injury for my 18th birthday. In the seven years since, I was proud to realize that my mobility has improved greatly. New Orleans has a billion obstacles to overcome ranging from uncut curbs, to crazy stumbling drunk people and monster Roaches roaming about. For me, Bourbon St. is borderline excessive of a tourist attraction yet, it has compelling history and its rich identity in the French Quarter.  While the Mardi Gras bead littered streets are a bit over-stimulating, you will be guaranteed not to have a dull time there. I was so thankful though to meet a woman in a most unexpected place who’d kindly write a long list of places other than Bourbon St.; places that the locals enjoy.

The first place written down on my bar napkin list was the lovely Frenchmen St. While it turned out a little less accessible, I enjoyed our time here immensely. The purposeful paradox that hole-in-the-wall restaurants are less easy to find is frustrating as a traveler, but if found, they are wonderfully bitter-sweet.  Yuki Izakaya, was the next phenomenal place on the list. Small and dimly lit, with a wooden bar and intimate little seating, red lights, Japanese music playing, a film shown on one wall and vibrant art on the others; it seemed like someplace to be found tucked into early 20th century Japan. Very cool. We ate a fresh tuna salad over a bed of greens, dumplings and Korokke, fried mashed potatoes with peas and corn inside and delicious! We forgot where our car was parked and had to mindfully re-orient ourselves by reading the signs of a red door, a couple sitting outside and cracks in the sidewalk. Thankfully, we found it.

My last day there I wanted to venture out and was searching to explore more of the city’s true nature. Last time I was here was two years after Hurricane Katrina and sadly it looked as if it might have happened merely a month before. I was astonished at still how much had to be done to ease the effects of the devastation and repair the damage. Traces of Katrina can still be seen in New Orleans. There’s an unsettling X-mark spray painted on many structures, buildings and homes. A sort of reverse hex mark, its exact meaning is still obscure to me, but two of the quadrants refer to victims found dead and alive and personal hazards still existing.  Intrigued, I went deeper and deeper into the seedy parts of town and wouldn’t you know just as I decide to turn around at an impassable point, I get a flat tire! Of course this would happen to me. As I pulled up in front of a random house an angel of a woman peeked her head out of her door and informed me of a tire shop only a block away. I’d barely pulled into their parking lot before they’d begun to jack my car up and put on my spare. I know it’s their job, but I was incredibly grateful! 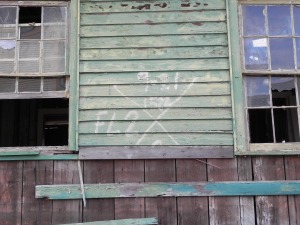 After a scorching, sweaty and only somewhat stressful day I was excited to find someplace fun to relax. I stumbled upon Three Legged Dog, a fair dive of a bar, but the places I adore most. I had to watch for cock roaches climbing into my tacos, but besides that I enjoyed my self. Others came here after their work on Bourbon St. was done, some mourning a friend who’d been sadly killed. It was eerie walking the dark streets startlingly reminiscent of the film Interview with a Vampire. On this spirited evening I was taken and to one of the city’s cemeteries to enjoy the company of the Super Moon and the sweetest souls. The light of the moon and shadows danced across the magnificent above ground tombs.  A night of such amazing energy, it was hard to leave and reminded me that I am indeed alive. I’ll endure everyday tightly embraced, even in the imminent arms of an inevitable death, only to remind myself to do just the opposite… to live.

One Response to The Siren City of New Orleans